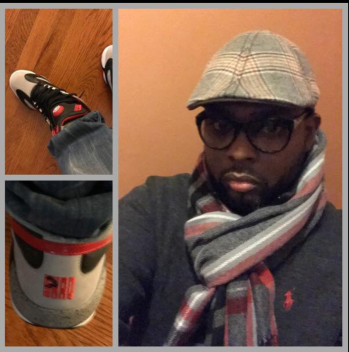 BALTIMORE — Reporters pulled at threads to piece together a coherent follow up story today to tidy up loose ends poking out about the near fatal shooting of Baltimore City police detective Isaac “Ike” Carrington.

The city’s newspaper of record, The Baltimore Sun, took pains to distinguish how police “blocked” traffic during Carrington’s transport to the hospital, but didn’t “shut down” streets as reported by sometime rival/sometime media partner television station WBAL. On Thursday, Aug 22 flailing local outlets sought out a second day story after Carrington, 43,  was craftily released from the hospital orchestrated by the department’s public relations team. 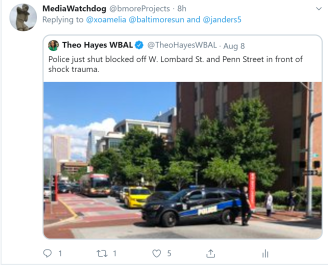 At the center of the patrol vehicles’ “block vs charge” debate is a friend of City Council President Brandon Scott, Ike Carrington, who has not given an interview to the press though the public has gotten to know him from his YouTube appearances.  We’ve learned that Carrington is a family man, fashion entrepreneur and police sergeant with a 22-year career in one of the nation’s most notoriously corrupt law enforcement agencies.

The curtain shielding the extent of corruption was pulled back during a high profile trial of two Baltimore Police department (BPD) officers in a specialized unit named Gun Trace Task Force (GTTF) four other BPD unit members testified in early 2018 that the corruption was rampant to the degree that even the Baltimore States Attorney was tipping BPD off about feds poking their noses in. Two sergeants Thomas Allers and Wayne Jenkins did not  testify against the slew of corrupt officers as cooperating witnesses and received harsh penalties.

Even before the cops/fed witnesses held their hands up to swear to tell the truth in fed court early 2018 about their extensive criminal activities,  Det Sgt Sean Suiter was shot in a vacant alley in West Baltimore. The still unsolved murder elevated suspicion that he was targeted for his role in planting evidence along with GTTF’s leader Wayne Jenkins.

Suiter died of a single gunshot wound to the back of his head on the exact same day he was scheduled to be a fed witness against the organized crime run out of BPD HQ by some of its most decorated officers.

Reporters looking at the Aug 8, 2019 attempted murder of Ike Carrington without revisiting the early 2018 GTTF trial and Sean Suiter’s Nov 2017 murder in Harlem Park would be committing the same professional bungling BPD is known for.

Putting a Hit on Officers Isn’t That Far Fetched

Dirty cops come with dirty laundry.  No one wants to keep that stench under wraps than those who thrive on the turnstiles that make up the criminal justice system – law enforcement, judges, and prosecutors.

Whilst the feds were making its case against GTTF’s dirty cops using wiretaps and surveillance, the Department of Justice (DOJ) was also rummaging through BPD HQ in response to the homicide death of Freddie Gray while in police custody.  Jenkins as the supervisor of GTTF, used the unrest to cash in – by selling looted pharmaceutical drugs. Record overdoses and violence immediately followed in the most vulnerable neighborhoods where GTTF tended to prey with lucrative results.

Truth be known, the lack of integrity of BPD officers was simmering under the surface way before the GTTF scandal boiled over.  Arguably, the most noteworthy notch in Carrington’s two decades long career with BPD (that is before being shot in the back running from a gunman while off duty) was his partnership with oft disciplined BPD Officer Thomas Wilson III.

Then federal judge, and now Baltimore City Police solicitor Andre Davis, had a peculiar habit of throwing out drug cases. He also had well publicized scathing remarks about the trustworthiness of drug bust investigations conducted by Wilson and Carrington. 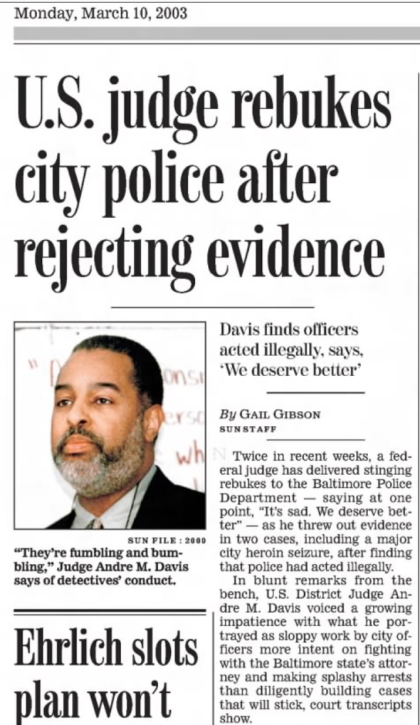 As a federal judge, Davis routinely reprimanded Baltimore Police and in doing so, undermined the integrity of prosecutors’ cases (when he didn’t out and out dismiss charges against drug kingpins).  It wouldn’t be a stretch to assume notorious drug dealers would delight in seeing Judge Davis handle their case – betting the unconstitutional behavior of BPD would draw his ire enough to toss the charges all together freeing them to carry on.

As if Judge Davis calling Wilson out on several occasions from 2003 to 2008 wasn’t enough, confessed drug dealer, fence for BPD’s Wayne Jenkins, Donald Stepp testified during the GTTF trial that Wilson worked side hustles for Jenkins and was familiar with Jenkins drug dealing. All local media found the GTTF trial compelling but to have a civilian insider who also worked as a bailbondsman  relay his brash testimony was novel.  A colorful character on the witness stand, Donald Stepp routinely dropped nuggets, like exposing Wilson as an ally of Jenkins, and keeping photos of GTTF shenanigans on his cell phone.

Two weeks after Carrington’s shooting, local established media outlets have not yet made the connection between the shooting of the fashionable sergeant in front of his home and the GTTF probe. 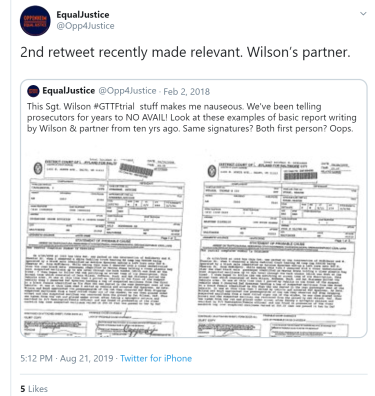 It did pop up on social media when public defender Todd Oppenheim posted a query that no MSM picked up on.  His Tweet is what led to this article. Specifically, Oppenheim called into question the partner history between Wilson and Carrington and wondered publicaly why no reporter had asked BPD officials if that GTTF link could be a possible motive for Carrington getting chased and shot in broad daylight.

It’s likely that the new commissioner Michael Harrison would behave exactly like his predecessor Kevin Davis who proclaimed that while the department had uncovered no motive for Suiter’s murder, his being scheduled to testify in a grand jury against his blue brethren was no way connected to his untimely demise. Zilch. Nada.

Independent journalists have looked closely into the Suiter case to reveal the possibility that the well respected officer was being exposed like a sitting duck. Namely Justine Barron has taken a painstaking look, frame by frame, of the video recovered that captures minutes leading up to his murder and BPD’s response.

Just this time last year, #WestBaltimore residents waited to exhale after holding its collective breath for the “independent” review board (IRB) examination of BPD’s November 2017 murder investigation of husband and father Sean Suiter.

From all appearances Suiter’s killer laid in wait until his partner David Bomenka was out of view before he was able to shoot the veteran homicide detective in the back of the head. Bomenka claimed he never saw anybody.

The IRB concluded there was no  convincing evidence that Suiter was murdered (but they never looked at his partner as being a suspect, only a witness) making suicide the only remaining option.  They also ruled out the shot to the back of the head as an accident.  PC Davis, after he was fired, stood by the decision to investigate Suiter’s death as a homicide and called the suicide theory “absurd.”

Woefully, initial media reports tend to be clumsy and hurried because the situation is fluid and outlets are desperate to not be scooped by their competitors. Add to in the high emotions of when police are investigating one of their own as a crime victim, we can be sure that this department will spin out of control ignoring all policies, protocols and training as it the IRB documented that they did during Suiter homicide almost a year ago.

Harrison’s BPD has kept media at bay and orchestrated the messaging about the shooting with a public relations spin that has pushed local reporters to the periphery. 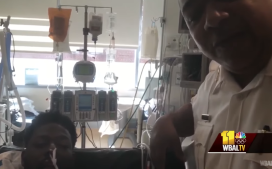 The wounded officer’s release from the hospital Wednesday was accompanied by a social media maelstrom of photos of salutes from various angles by various first responders provided by BPD. Media was not permitted access to Carrington who has not given a public statement about his attackers.

Carrington and a neighbor were standing in front of his home where he lived with his family in the Frankford section of Northeast Baltimore when two men wearing masks approached. The neighbor dropped his wallet and phone and ran across the street, he told Fox45 Keith Daniels.  Carrington ran in the opposite direction according to multiple reports.

A neighbor and friend of Carrington (Jabir Pasha) who lives near the corner at Todd Ave heard the shots and then saw the Carrington, prompted him to render aid, reported the Baltimore Sun. Pasha noted a gunshot wound to both arms and also one in the back.

WJZ spoke with neighbors and captured the prerequisite “I’m shocked” interviews from people who claimed the neighborhood is quiet and friendly. 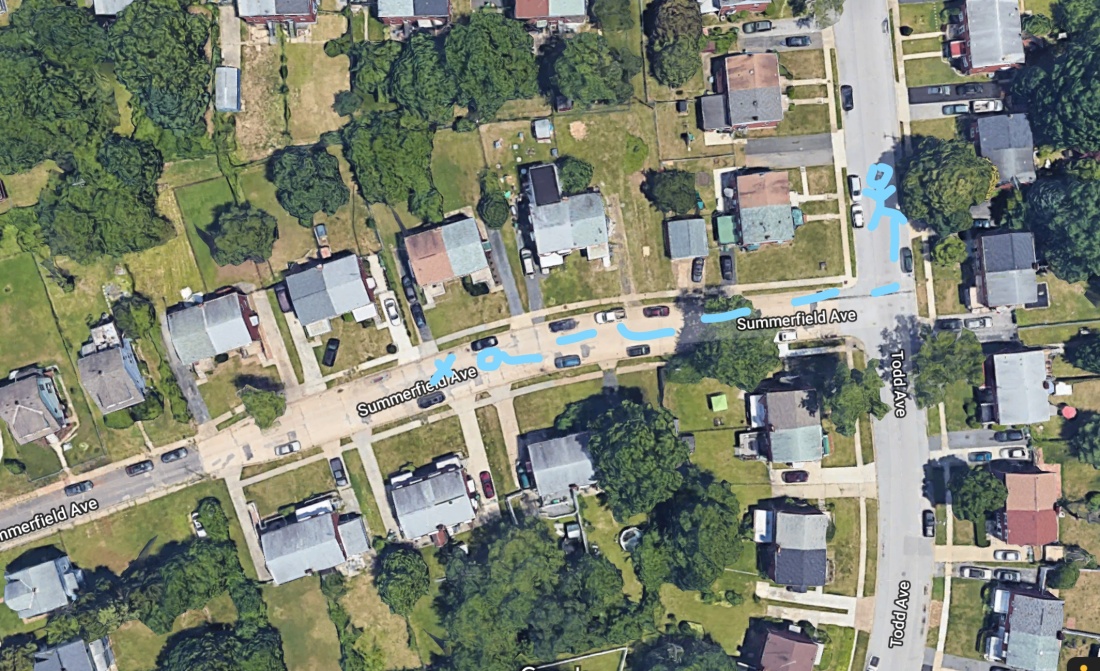 A total of six shots were fired in Carrington’s direction. A neighbor’s surveillance camera captured the sound of four shots in quick succession. After a 2-3 second silence, two more quick shots.  The “robber” chased only Carrington, who ran away from his home and his friend as his assailant gave chase.

Police quickly notified the public to be on the look out for a blue Acura that was seen fleeing the scene, which in Baltimore is tantamount for searching for a 5 feet 7 inch black man with a goatee – they’re everywhere. A similar non-description description was given for the suspect in Suiter’s murder, a black man wearing a hat and a black jacket – in November.  The reward for Carrington’s shooting is $19,000. Suiter’s broke records at over $200,000 and is still unclaimed.

In a city where anyone’s life could be snuffed out at any minute, having that reality apply to law enforcement officers is extremely unsettling. Add in that they were both black officers should arouse suspicion in an agency noted for its institutional racism.

Carrington was well known in his neighborhood and it was no secret he was an officer with the Baltimore Police department.  He was gunned down steps from his house while the person within arms reach received little attention from the robbers.

Baltimore residents deserve a legislature brave enough to insist that outside independent investigators  look into if anyone connected to LE could be responsible for the shooting of Carrington and the murder of Suiter.  In the upcoming election for mayor, any serious candidate must speak on the need to assure the public that no one from LE is actually targeting BPD.

Until taken off the table, concerned citizens are likely to believe that both Carrington and Suiter were targeted because of their affilitation with crooked cops who have an ongoing operation within BPD.  Just because the snake’s head was cut off when Wayne Jenkins was arrested (and kept his mouth shut) doesn’t mean the body of the snake isn’t slithering around the halls of easily one of the most corrupt police departments in US history.

A legacy resident of West Baltimore and a product of Baltimore City Public Schools. A graduate of Towson and Morgan Universities. Survived the War on Drugs and the demolition of Murphy Homes and "The Terrace". Journalist, educator, and community activist and policy wonk. Contrarian by choice and realist by nature. Guided by W.E.B DuBois and inspired by Frederick Douglass' Fourth of July speech. Heroes include everyone who ever rented west of McCulloh St to the county line. View all posts by BmoreProjects